Mayor Yioset De La Cruz was born March 1, 1973 in Havana, Cuba. He lived in Cuba until the age of seven. In 1980, he moved to Venezuela and lived there for three years. Mayor De La Cruz arrived in Miami in December of 1983, and moved to Hialeah Gardens in 1984 where he now resides with his wife Jenny De la Cruz and their sons Joseph and Jonathan. 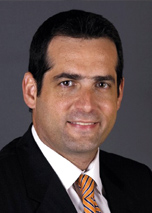